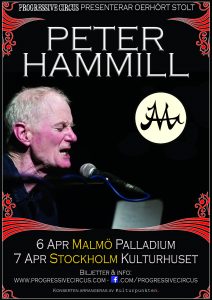 It is a huge honour to present Progressive Circus’ two-date collaboration with the icon PETER HAMMILL – legendary singer, composer, wordsmith and inspirational source for 50 years and counting!

As one of the most expressive and caracteristic voices from the first wave of progressive rock, Peter Hammill has lead the way for a more direct and unpolished approach to singing and composing. Since the birth of Van der Graaf Generator in Manchester in 1967, Peter’s existensial, highly sophisticated and brutally honest lyrics have struck a chord in a very wide spectrum of fans, inspiring many singing followers such as Bruce Dickinson (Iron Maiden), Lady Gaga, Ola Salo, John Lydon (Sex Pistols), David Bowie and Mikael Åkerfeldt (Opeth) to name some.

Peter has led a productive solo career with some classic must-have albums from the seventies, where he has explored his creativity even further than in VdGG. His 40th album ”From the Trees” was released in November 2017, and is a beatiful, thoughtful collection of reflections on living in the third act of life, where Peter’s dynamic voice often stands alone with piano and/or guitar, in a highly effective and moving way.

In April you will get the chance to see this legend for a full concert, with only a grand piano and an acoustic guitar on stage. This is the purest form of the genious Peter Hammill, and we look forward to share this unique and intimate concert experience with you! Spread the word to all you think should be there!

The concert is arranged by Kulturpunkten.