Mike Portnoy’s Shattered Fortress played at Slagthuset in Malmö, July 2nd 2017. Next to None were the opening act, and the event was arranged by Kulturpunkten. 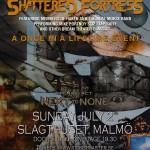 Next to None – photos by Magnus Bergström

When Progressive Circus started in 2014 we would have laughed for HOURS if anyone suggested we should book and arrange a Scandinavian exclusive show with Mike Portnoy’s all star band on a DT revisited tour… That was then, and now we have ”landed” slightly after Sunday’s (in many aspect) very special event where we did just that.

As many of you know, making this gig happen was far from granted. When mailing Hexagon Booking the day the rest of the tour was announced, we were happy to be met by a big will to find a possible way to make this a reality. Although the conditions included a 32 h drive for band+crew and no day off for 7 days, instead of a 4 h drive and a day off in Paris, they were as enthusiastic as us, and as you noticed this Sunday – IT HAPPENED!

After an extremely efficient and professional 1 hour rigging from local and travelling crew, we had a terrific evening and in our opinion some of the best music possible from stage!

There are many who contributed to the experience. First of all, a HUGE and heartfelt THANKS to Jérome at Hexagon Booking, tour manager Daniel, Mike for doing this tour and wanting to reach as many fans as possible! Huge thanks to crew and bands for their professionality, and to local tech company LEC who did a marvellous job.

It was beautiful to see all of you patient and enthusiastic people from many different nationalities, backgrounds and beliefs gathered to rock along to the music and contribute to the great atmosphere! To you who travelled from…

Also, many thanks to all who helped us spread the word, especially Martin Sandberg who kept promoting this in every way possible since it was announced! Many thanks to Karin & Andreas for helping us with catering, hospitality, merch and whatever-is-needed, and Tommy and Karin Arnesson for taking well care of our kids.

Now we’re looking forward and encourage you all to come to IQ at Bryggarsalen in Stockholm Oct 13th and MAGMA at KB in Malmö Oct 28th. It will be great

You will also receive a Survey Monkey link via mail later this week, and we would be very happy if you want to help us by filling it in!

http://www.dprp.net/concrev/201710-fortress.php (by Ian Smith who also took the awesome photo used for this post)

Also, check out this AMAZING video clip of the show – by crew member Simen Sandnes:
https://youtu.be/Rntiugixrao