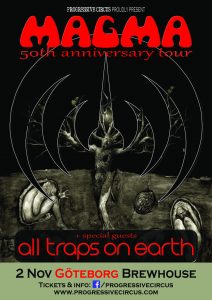 We are super excited to present the ULTIMATE combo for fans of truly progressive rock:

MAGMA + ALL TRAPS ON EARTH

When we arranged MAGMA’s first Swedish concert in 2015, it wasn’t only a magic evening that many fans have referred to as one of their best concert experiences ever, but also the start of a fruitful collaboration where we bring Magma’s completely unique musical universe to the Swedish crowds – now for the third time in four years, to celebrate their 50th anniversary.

The opening act ALL TRAPS ON EARTH have until now been known as the studio project that produced ”A Drop of Light” – the best album of 2018 according to a large part of the best-of-lists in the progressive rock community – including the prestigeous reference website www.progarchives.com We are so happy to announce them as a live act, and their only announced concert next to Night of the prog 2019.

Indeed, this will be a HIGHLY SPECIAL evening, and we welcome you all to join us, Saturday November 2 at Brewhouse in Gothenburg, so you can say that YOU WERE THERE!

In case you’re not familiar with the bands, MAGMA was founded in Paris by drummer Christian Vander in 1969, and have created a world of creative music, mostly centered around a highly ambitious conceptual mythology with a sci-fi-ish story about a people leaving earth for the planet Kobaïa.
The lyrics are mainly sung in Kobaïan – a fictive, phonetic language that isn’t always translatable, and the music is based on Vander’s energetic and innovative jazz drumming, Philippe Bussonet’s driving fuzz bass and Carl Orff like operatic choir arrangements from Stella Vander, Isabelle Feuillebois and Hervé Aknin. The repetitive and hypnotic riffs are accentuated and developed with the help of vibrafonist Benoît Alziary, guitarist Rudy Blas and electric pianist Jérôme Martineau. All in all, Magma gives a completely unique live experience that may never occur on Swedish ground again.

ALL TRAPS ON EARTH was at first a studio project lead by Änglagård’s bass player Johan Brand and their former keyboard player Thomas Johnson. However, after ”A Drop of Light” was released in late 2018 things changed. The album got an overwhelming reception, the record stock sold out in no time and the idea of a live band took shape. We’ve known that Johan is a huge Magma fans since Änglagård’s concert at Progressive Circus 2015 and couldn’t help asking if ATOE were interested in this combo evening, and they sure were!

If you haven’t heard ”A Drop of Light” yet, we strongly recommend you to do so repeatedly. There’s so much dynamics and hidden gems in this rollercoaster of powerful Mellotron part, soothing wind instrument melodies and brutally heavy themes that may not appear the first time you hear it.

Get your tickets here:
https://www.nortic.se/dagny/event/21314

…or get a combo ticket for Gothenburg, to BOTH Magma + All traps on Earth at Brewhouse Nov 2 AND The Flower Kings + Kayak Dec 12: https://www.nortic.se/dagny/show/76225