Progressive Circus 2016 – part I was held at Slagthuset in Malmö, April 9th 2016. The festival was arranged by Kulturpunkten, with the line-up: IQ, Anekdoten, Atlas, Me and my Kites, Soniq Circus and Harry Bult. 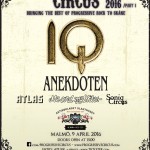 Guitar tabs to IQ albums Tales from the Lush Attic, The Wake, Nomzamo and Ever

ME AND MY KITES

A rough French – English translation of the Chromatique review:

Sweden does it’s circus
by the Chromatique.net team

For some years, the association Progressive Circus [sic, it’s arranged by Kulturpunkten, a company] promotes progressive rock in Skåne, the southern region of Sweden, with the festival of the same name in april as the highlight. The growing success of this event has allowed some of the genre’s biggest names to come. In 2015 it was Änglagård and Beardfish. For this 2016 edition that takes place in Malmö, it’s Anekdoten’s and IQ’s turn to secure the show, accompanied by Soniq Circus, Me and My Kites and Atlas.

From Copenhagen, it’s relatively easy to get to the other side of the sound of Öresund since a bridge between the two countries was constructed in 2000. This spectacular crossing that is also a symbol of openness (perfect themes for music progressive) was unfortunately tarnished by, not one, but two identity checks, a bitter reminder that the construction of Europe and openness of minds and borders is an ongoing work, constantly threatened by conservatism and xenophobia .

After this inconvenience which delayed us at the entrance of the main hall of Slagthuset (which, as the name in Swedish suggests, is the old slaughterhouse in the city of Malmö), it has 500 seats and has excellent sound that showcased all groups attending the festival. Totally immersed in the tradition of classic prog, the first group of the day Soniq Circus shows a sympathetic will but that lacks orginality. All the clichés of the genre are present, long pieces, changing rhythms, symphonic keyboards and shimmering red cape as a bonus, carried by the mood of the group. In addition to own compositions, the band plays covers of some of the classics of the genre, which delighted the audience that was already present.

It is then Me and my Kites’ turn to enter the stage. The large Swedish group includes seven musicians (rhythm section, three guitarists, a violinist and a flutist) and is inspired by the psychedelic pop of the late sixties. Again, there will be no real surprise, the group focuses on an appropriate mimicry, down to the costumes worn at stage, and even if the music is good, the musicians sometimes lack presence. The songs are short and based on pleasant melodies carried by rich orchestrations.

The third Swedish band of the evening, Atlas has just released a single album in 1979, Blå Vardag, considered an unknown masterpiece by some. The group subsequently disbanded to reunite in 2016 for the festival. The musicians of Atlas, with the best will in the world, remain stoic throughout their set, leaving a void in the middle of the stage, as the various members have chosen to play on either side. It is obvious that some nostalgics who discovered the group in the past were delighted to see this cult band, though it is difficult to find scenic qualities to the group. The music, however, is relatively conventional, sticking to standard progressive from the mid-seventies.

It was a complete change in atmosphere thereafter with the first headliner, Anekdoten. Accompanied by British guitarist Marty Willson-Piper, the four Swedes start their concert with ”Get Out Alive” from their latest album, the very successful Until All The Ghosts Are Gone. Immediately, the audience is being taken away by the intensity of the musicians that will remain throughout the set. Anekdoten perfectly recreates the progressive and dark edges from their latest album. The pieces are linked together in a furious melancholic and melodic stream. Carried by the two frontmen and singers Nicklas Barker and Jan Erik Liljeström, Anekdoten has a unique presence and energy. The group also plays older songs, dating back all the way back to Nucleus, and alternates with their newer compositions. On the keyboards, we sadly see that Anna Sofi Dahlberg stands back in relation to the rest of the band, with the mellotron sometimes being a little lost in the mix, a problem that unfortunately is old. Even in the quieter moments, the group retains its raw intensity. The songs are generally in line with the studio versions even if the band sometimes allows some excursions.

Finally it is IQ’s turn to close the evening. A first for Chromatique who have had to travel to Sweden to attend a concert of the British band (the number of concerts by the band in France during the last decade are indeed zero). With ”Sacred Sound” from the album Dark Matter, IQ has a perfect opening track, starting with mysterious keyboard pads. The track races on when all the musicians play in unison. From the very first minutes, IQ is perfectly in place and Peter Nicholls shows a communicative energy. Throughout the concert the singer has a captivating presence and his unique voice is perfectly in place. Although the English group doesn’t tour much, their professionalism is impeccable, with their use of light and video projections from album artwork to immerse the audience in the music. In a concert that it something of a career summary, all the Peter Nicholls albums were treated to one or more songs except Ever. ”The Road of Bones”, ”Frequency” and the 80’s songs make up some of the most successful moments of the concert. The group doesn’t refrain from playing a long epic song in the great progressive rock tradition of course. There’s no lack of possible choices in the discography and it’s ”The Narrow Margin» from Subterranea who is honored tonight. This is an opportunity for Nicholls to announce that film adaptation of the concept album is almost finished. The later songs as well as the older pieces are particularily well interpreted by an enthusiastic group. On keyboards, Neil Durant, who arrived for the last album, The Road of Bones, proves that he is perfectly adapted to the British band, mastering his duties from beginning to end, no matter if it’s adding atmosphere or solos. The other members are equally involved in their duties, Mike Holmes and his always melodic solos, Paul Cook and Tim Esau forming an effective rhythmic foundation. ”Awake and Nervous” ends this evening in a very nice way, energetic and uplifting.

For this third edition of the Progressive Circus, the Chromateam was spoiled by the organization of the Swedish Association of the same name. If we can possibly regret a lack of risk-taking for the lesser known bands, Anekdoten and IQ transcended in an evening that will be be with us in our memories.

This Blu-Ray class Anekdoten video is edited from 3 HD cameras and multi channel audio from the mixer:

Almost 24 hours have passed since IQ ended PC16 with ”Awake and Nervous” and the arrangers are now extremely high on life, and tired =)

We’re incredibly lucky to live in a time and a country where we’re able to realise our mad dreams and get so much love in return, making us think we’re maybe not that mad after all. There were many highlights from throughout the day, and we’d like to give some HUGE ”Thank You”s to:

* The PC16 visitors who support our vision to bring… the BEST of progressive rock to Skåne. We loved to see the many FB updates of people travelling to us with high expectations for the day. Special thanks to the visitors travelling from USA, Germany, UK (you were a bunch), France, Russia, Poland, Denmark, north Sweden, Ukraine, Belgium, Slovakia, and I’ve probably missed some of you (feel free to comment).

* The wonderful bands, who not only gave their very best on stage, but also contributed with the good positive and collaborative spirit that we want to be significant for PC events.

* The staff of Slagthuset and the technical crew from Tune who gave us a most professional service and made it a true joy to arrange a festival.

Now we’ll first have a look at the material that was recorded yesterday with 3 HD cameras and multichannel audio for the SC, MAMK, Atlas and Anekdoten concerts. We hope you’ll get to see much of it eventually in some form.

Then we shift focus towards several future veeery nice possible PC events this autumn and summer of ’17, apart from the ”ordinary” PC17. Rest assured we’ll keep you updated if you follow us here =)

For our next event, we have decided to put together a more formalized group of volunteers to have responsibility for putting up posters, merch sales, band hospitality, entrance, picking up bands etc. If you’re interested, please contact us on Facebook, or info@progressivecircus.com

That’s it for now from the two PC arrangers! 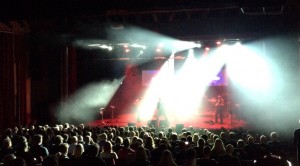