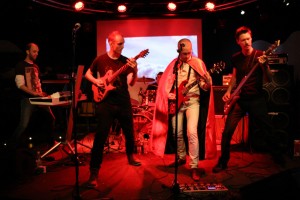 Since 2014 when SONIQ CIRCUS teamed up with Vulkan and turned it into the first Progressive Circus, the festival has taken huge leaps in ambition and it’s with great pride that SONIQ CIRCUS hosts and opens PC16, setting the mood for a prog craving audience at Slagthuset, Malmö.…

With one large foot in classic progressive rock and one – slightly smaller – in modern metal, SONIQ CIRCUS’ aim is to seduce the listener with a musical journey. The self titled debut album from 2007 and “Reflections in the Hourglass” (2011) have received very positive reviews and are filled with longer songs, odd time signatures, heavy riffs and memorable melodies. The reviewers often see influences from King Crimson, Rush, Saga and Spock’s Beard. SONIQ CIRCUS will also play pieces from the to-be-released-someday,-hopefully-soon third album, “Cursed Cruise” on April 9th.