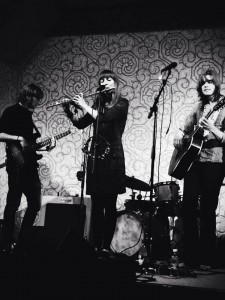 Few bands that were around in 68-69’ sound as much 68-69’ as ME AND MY KITES, providing the PC16 audience with an express ticket to their whimsical, grand, psychedelic and progressive musical world.

The soul of their debut album ”Like a dream back then” (2013) is clearly rooted in the hippie era of the late 60’s, not only sound wise but also in how it came to be. Vocalist/ guitarist/ bass player/ flutist/ song writer/ producer David Svedmyr invited twenty-ish of his musically active friends, including AnnaMy of PC15 fame, to a cottage near Stockholm to eat, drink, contemplate on the universe, go swimming and record.

Since then, the band has taken a more solid form, and has been a cherished live favourite at festivals like Uppsala Progressive Festival, Fest i Logen and Psykjunta. The very recently released ”Is it real or is it made?” is a psychedelic/progressive masterpiece, filled with pretty harmonies, flutes, and acoustic guitars, sounding much like early Caravan or Pink Floyd, Kevin Ayers and The Beatles. We strongly recommend listening to tracks like the epic ”Common Life”, the beautiful ”Cala de San Pedro” and “War”, which is basically a loophole in space and time to Haight-Ashbury ’68.

Me and my kites official homepage

Me and my kites @ Spotify