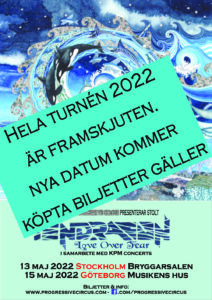 Due to the still ongoing Covid situation, Pendragon has taken the decision to postpone the whole 2022 tour. The band had to chose to either gas or brake right now in order to make the 30 planned dates possible, and with the current restrictions and uncertainties in mind decided to rather postpone than take the risks. We fully understand this decision and will get back to you with new dates when we have them.
All bought tickets are valid for the new dates, but can be refunded until May 15th 2022.

Here’s our announcement for Pendragon:

The shows are announced in collaboration with KPM Concerts.

Progressive Circus has done surveys to concert visitors since 2016, and are very happy to present one of the most asked for bands in collaboration with KPM concerts:

Pendragon are one of the foremost leading bands in today’s progressive rock scene, led by guitarist and vocalist Nick Barrett; their roots date back to the neo-progressive era of the 1980s,alongside contemporaries such as Marillion & IQ . Pendragon have flown the flag for progressive rock music with a compelling catalogue of acclaimed albums.

Pendragon’s music cuts across all aspects of progressive and classic rock, and features the usual armoury of synthesisers and guitars, deployed in tandem with a strong emphasis upon melody and lyrical flair. With shows being scheduled in across Europe in 2020 in support of the release of their new album ‘Love Over Fear’, we have seized the chance to arrange their first Swedish concerts in over 10 years, in collaboration with KPM concerts: