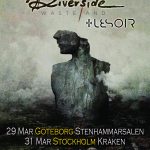 After 18 years as a band, polish Riverside have established themselves as one of the bigger names in the progressive rock world, and have gained a reputation as a solid live act, including appearances on the major festivals like ProgPower, Be Prog my Friend and Night of the Prog.

Their melancolic progressive rock with metal influences has reached a wide audience over the years, including 3 gold albums in Poland, and critically acclaimed masterpieces like Out of Myself (2003), Anno Domini High Definition (2009) and the latest Wasteland (2018).

Since the tragic death of founding member and guitar player Piotr Grudziński in 2016, Riverside is officially a trio: Mariusz Duda on vocals, guitars and bass, Michal Lapaj on keyboards and Piotr Kozieradzki on drums, who have all been a part of the band since the early years. On stage, the band is complemented by Maciej Meller on guitar.

Originally, the Riverside dates were supposed to collide with the Neal Morse Band, and after some hard work, we managed to squeeze them a bit, and are happy to welcome you to:

Discounted tickets are available to members of Gothenburg Art Rock Society (GARF), just like for the Neal Morse Band concerts. Join here to get access to the discount: http://garf.eu/kontakt.html

If you haven’t heard Wasteland yet, you should! It’s their best album (claims the biased promotors), and here’s our favourite track:
https://www.youtube.com/watch?v=fw-9AtkVkUA
https://youtu.be/bW0QP8YVAec

This is what Mariusz Duda has to say about it: Wasteland” is mostly about what’s happening in the world these days but it also makes a reference to the tragedy that befell the band in 2016. Musically, we’ve returned to darker sounds but we have also turned a new page and recorded the album in a different style. It’s still RIVERSIDE but expressed in a much deeper and more mature way.

We are also happy to announce LESOIR as opening act to the Riverside concerts in Gothenburg Marchs 29 and Stockholm March 31.

The five-piece Dutch art rock band Lesoir was founded in 2010, has released four great albums so far, and has in recent years performed at Night of the Prog, Midsummer prog festival and with bands like The Gentle Storm, Delain, Evergrey, The Pineapple Thief and Within Temptation. Lesoir is fronted by the two female vocalists Maartje Meessen (vocals, flute, piano) and Eleën Bartholomeus (vocals, guitar, keyboards, percussion), backed by Ingo Dassen on guitar and the rhythm section Bob van Heumen on drums and Ingo Heijnsbroek on bass.

Lesoirs music is melodic, powerful and dynamic, with influences such as Anathema, Porcupine Tree, Steven Wilson and Anneke van Giersbergen. The fifth album will be released in 2019 on the German quality label Gentle Art Of Music and is produced by John Cornfield (Oasis, Muse, Supergrass) and Bruce Soord (The Pineapple Thief).